Thoughts on ‘Bringing Up Bébé’

My friend, Stacey, sent me a copy of the much-talked-about book, “Bringing Up Bebe,” by Pamela Druckerman, an American journalist living in Paris.

I was curious about it for two reasons. First, anyone who gives a nod to Katharine Hepburn and Cary Grant is fine by me.

Katharine Hepburn and Cary Grant in 1938's Bringing Up Baby

Second, I’m bring up my own bébé, so why not.

I devoured the book, studiously underlining, dog-earing points I wanted to consider later. Then I laughed, and completely identified with the Americans in the book who Druckerman says make pregnancy and child-rearing an “independent research project.” 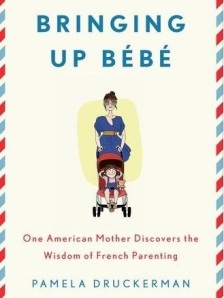 Stacey and I had a Skype date book club to discuss Bébé. Like any good book club, we talked for two hours and spent about 23 seconds on the book. There’s never enough time.

So I thought I’d also write a bit about my take on Druckerman’s book, just for fun.

My overall reaction was positive but it didn’t start off that way. I must admit, being American, I felt slighted that anyone would compare my ways to those of the French.

I felt judged. And fat. And very American in my defensiveness.

Then I got over it.

As the author reminds her readers, she is merely sharing her experiences, observations and a few scientific studies to support her conclusions. It’s wrapped up in a generally well written, entertaining guide for anyone interested in examining their own parenting habits and exploring “wisdom” that can often be found in other cultures.

Here are some points that struck a chord.

First, I want to remember these two thoughts when I think about “finding balance as a stay-at-home mom,” as this I set out to do with this blog. In fact, it has me pondering, lately, just exactly what do I think balance really means.

“’For American women, the role of mom is very segmented, very absolute,’ Sharon says. ‘When they wear the mom ‘hat,’ they wear the mom clothes. When they’re sexy, they’re totally sexy. And the kids can see only the ‘mom’ part.’ In France (and apparently in Belgium, too) the ‘mom’ and ‘woman’ roles ideally are fused. At any given time, you can see both.” (p. 132)

“When we Americans talk about work-life balance, we’re describing a kind of juggling, where we’re trying to keep all parts of our lives in motion without screwing up any of them too badly. The French also talk about l’équilibre. But they mean it differently. For them, it’s about not letting any one part of life – including parenting – overwhelm the rest.” (p. 147)

I love this word, kindergarcy: paying more attention to a child’s upbringing than can be good for them. (page 4)

There’s a sense that American parents, she observed, are frustrated by, but trapped in, a “relentless, unhappy pace” of parenting.

“Today’s young parents are part of the most psychoanalyzed generation ever and have absorbed the idea that every choice we make could damage our kids.”

Ah, this is me: research, and worry, over the billions of conflicting ideas in the world of parenting media. We do it all so we give our kids every opportunity, protect them from every harm. We lay down exhausted at night wondering what we could be doing wrong, feeling guilty for things we couldn’t do perfectly.

“For American mothers, guilt is an emotional tax we pay for going to work, not buying organic vegetables, or plopping our kids in front of the television so we can surf the Internet or make dinner. If we feel guilty, then it’s easier to do these things. We’re not just selfish. We’ve “paid” for our lapses. …. French mothers don’t valorize this guilt. To the contrary, they consider it unhealthy and unpleasant, and they try to banish it.”

French women say guilt is a trap. “The perfect mother doesn’t exist. We say this to reassure each other.” (p. 146)

I think I’ll steal this line.

We just went through sleep training. Sophie was waking a billion times at night and couldn’t fall asleep on her own. She was nearly 6 months old when we did a “modified cry-it-out.”

If we’d have read about “The Pause,” as Druckerman calls this practice by the French, maybe we could have avoided the sleep training.

When French babies cry at night, their parents wait a few minutes before responding to give the child a chance to learn how to put themselves to sleep. Parents then learn to distinguish between a cry of frustration and a cry of needs.

“The Pause works in part because parents believe that tiny babies aren’t helpless blobs. They can learn things. This learning, done gently and at a baby’s own pace, isn’t damaging. To the contrary, parents believe it gives the babies confidence and serenity, and makes them aware of other people.” (p. 54)

They also implement The Pause for older children as well, asking a child to wait a moment while a parent finishes a conversation, or wait their turn for a toy. This delayed gratification, she said, could be the reason “French children don’t throw food.”

“Could it be that making children delay gratification (in terms of minutes or seconds) – as middle class French parents do – actually makes them calmer and more resilient? Whereas middle-class American kids, who are in general more used to getting what they want right away, go to pieces under stress?” (p. 59)

These kids aren’t just natural born waiters. They’ve mastered the skill of distracting themselves so the wait doesn’t become unbearable and lead to meltdowns.

If the child gets frustrated in the mean time, that’s OK. To the French, if kids don’t know frustration, they will never know how to cope with life’s inevitable frustrations.

On discipline, or educating the young

A lot of these other points will come in down the road. Sophie’s not exactly talking back. Yet. But her take on “education” gives me something to ponder as we head into the years of temper tantrums.

Druckerman wrote a lot about the cadre, or framework of rules that are non-negotiable. Parents will have to decide which points are set in stone, such as bed times and at least trying all the foods on a child’s plate. Within that framework, the children have a lot of freedom.

Parents strike a balance between listening to their kids’ requests and instilling the understanding that the parents make the final decisions. It gives parents confidence as they enforce rules, makes kids feel secure and helps keep the family balanced, she explained.

“American parents like me just assume that we’ll have to chase our kids around the park all afternoon or spend half a dinner party putting them to bed. It’s irritating, but it’s come to seem normal. For French parents, living with a child-king seems wildly out of balance and bad for the whole family.”

One set of rules that seems to run through all French families, is the importance in teaching their kids to say the magic words: please, thank you, hello and good-bye. It’s a symbol of respect, acknowledging that others matter, that the child isn’t the center of the universe. (p. 154)

Druckerman also noted a difference in how parents corrected their children.

“Rather than saying: ‘don’t hit Jules,’ they typically say, ‘you don’t have the right to hit Jules.’ This is more than a semantic difference. It feels different to say it this way. The French phrasing suggests that there’s a fixed and coherent system of rights, which both children and adults can refer to.  It also makes clear that the child does have the right to do other things.” (p. 229)

Discipline, for French families, isn’t an imposition of rules, it’s an education. (p. 234)

“This idea that you’re teaching, not policing, makes the tone a lot gentler in France. When (her son) Leo refuses to use his silverware at dinner, I try to imagine that I’m teaching him to use a fork, much like I’d teach him a letter of the alphabet. This makes it easier for me to be patient and calm. I no longer feel disrespected and angry when he doesn’t immediately comply. And with some of the stress off the situation, he’s more amiable about trying. I don’t yell, and dinner is more pleasant for everyone.”

If you took the time to read the entire post, you probably have too much time on your hands. So you might just have a few minutes to actually read Druckerman’s book. If you did and you had some thoughts, I’d love to hear what you thought.

I'm a stay-at-home mom to two girls in my boyfriend's hometown of Bern, Switzerland. Life as a new mom in a foreign country has been, in so many ways, rewarding and challenging. I will document that journey here, on Another 52 Weeks.
View all posts by Tara McLaughlin →
This entry was posted in Just for Fun, Week by Week and tagged babies, books, Bringing up Bebe, discipline, education, expats, family, France, parenting, reading, Switzerland. Bookmark the permalink.

1 Response to Thoughts on ‘Bringing Up Bébé’